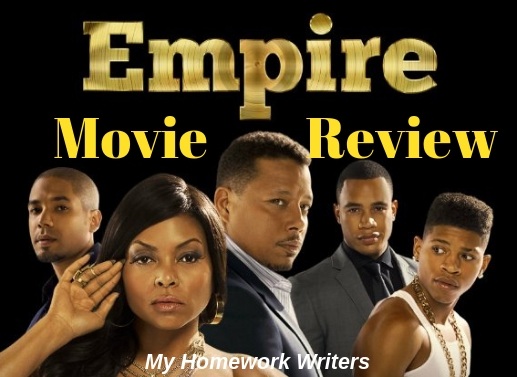 Reviewing a movie involves analyzing the elements in a movie and giving your opinion and recommendations. You should dedicate a paragraph to give the reader a summary of the plot. Your analysis should include verifiable details and you can accomplish this by giving examples from the movie. The movie assignment in your class should not give you a headache because you can get assignment help from the homework assist experts at My homework writers. Another major aspect of your movie review assignment is conducting thorough research. This is because all the details will not be present in the movie itself. Below is a sample from our homework assist experts at My homework writers.

It is always lovely to watch a black dynasty drama and Empire is beyond outstanding. The Fox TV series registered ratings that made it the biggest debut by a drama in the entire decade. The mixture of hip-hop and a lot of drama has created a new era for television with African-Americans as the leads. Lee Daniels, the executive producer of Empire made his break in 2009 through a grim film called Precious that focused on poverty, abuse, and incest in Harlem in the 80s.

Empire begins with a record company mogul, Lucious Lyon played by Terrence Howard stating his intentions to step down as CEO and leave the company called Empire in the hands of one of his three sons: Andre, Jamal, and Hakeem by the end of the year. Andre played by Trai Byers is business oriented and has bipolar disorder, Jamal played by Jussie Smollett is a musical genius who is also gay and Hakeem played by Bryshere Y. Gray is a young rap starlet who is also a bad boy. Lucious pins his sons against each other by telling them to clean up their acts because he will only choose one of them.

We then get to see Cookie, the ex-wife of Lucious and the mother of his three sons played by Taraji. P. Henson who gets released from prison after 17 years. She goes to Empire and demands that Lucious gives her share of the company which started with her drug money. His refusal to yield to her demands creates a love-hate relationship between them due to the struggle to control the company and also tests the loyalty of their sons. The drama that follows is explosive and leaves you at the edge of your seat.

This is no typical black dynasty drama because it is a combination of music, power, money, and sex. It is a story that everybody can relate to because it represents the American dream. This is a family that started from humble beginnings and made it to the top and is still trying to succeed. Taraji P. Henson who plays Cookie made an impressive performance that led to her being the most quoted character in television. Her breathtaking and daring takedowns are the things the viewers look forward to every time she is on-screen.

One of her outstanding performances was in the first episode when she gave Hakeem an old-school beating with a mop handle. When approached to be part of the show, Taraji wanted Terrence to be her co-star because she felt they would have the best chemistry. It turned out to be true because their performances together are epic.

Empire brings a lot of issues affecting our society to light. We get to see the intolerance that people have on homosexuality. This is evident in the strained relationship between Lucious and his son Jamal who is gay. Lucious even tries to force a straight marriage on his son. A flashback reveals that when Lucious noticed homosexuality tendencies on his son at a young age, he threw him in a trash can. The trash can story is apparently very real in Lee Daniel’s life and that was the inspiration behind it. Lucious even threatens to disown him if Jamal reveals his sexual orientation to the world. Mental illness is another subject that we see through Andre.

Music is a powerful element of the show as most of the drama is related to music in the Empire label setting. The wardrobe of the characters is also inspiring especially Cookie’s wardrobe. Empire is a drama for this generation and it is wild, explosive and fun to watch. The cast is amazing due to their outstanding performances and it only keeps getting better.